The former King of Mustang has died 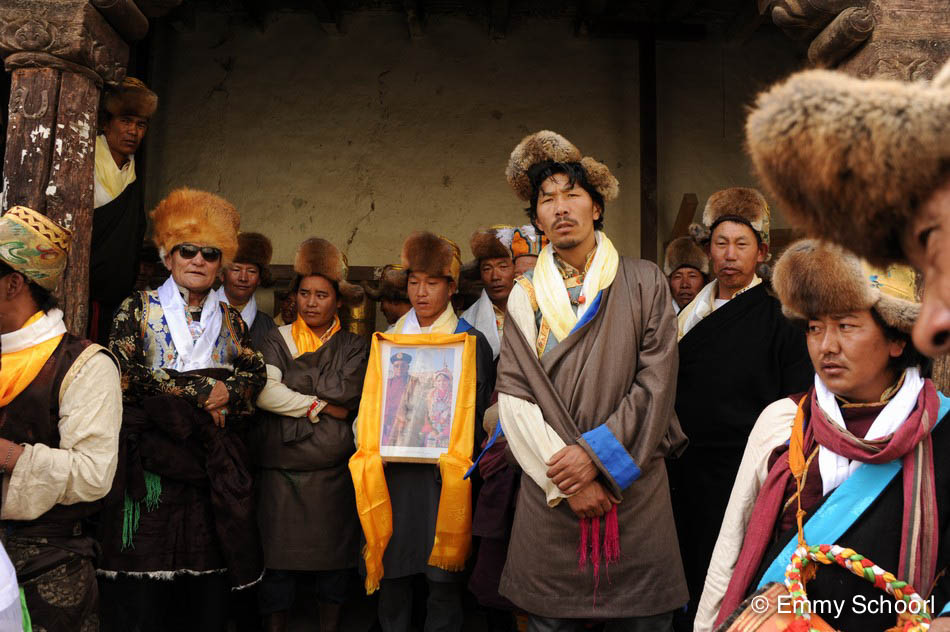 A Photo of the King Bista & his wife

Just after I wrote my first blog about Mustang, I saw in the news at the BBC.com that the last King of Mustang has died:

Nepal remembers Bista, last king of Upper Mustang
The last king of Upper Mustang, Jigme Dorje Palbar Bista, has passed away on Friday (December 18th) aged 86. He reigned the Buddhist kingdom for more than half a century, so it is a big loss for Mustang. In 2008 King Bista lost his royal title when Nepal abolished its own centuries-old monarchy. He lived most of his life in the medieval capital Lo Manthang, acting as local spiritual leader. He moved to Kathmandu after he started to experience health problems. “He had not been well on and off,” Tsewang Bista, the nephew said, adding that the former king was “having more difficulty recently because of the cold”.

The presence of the late King Bista 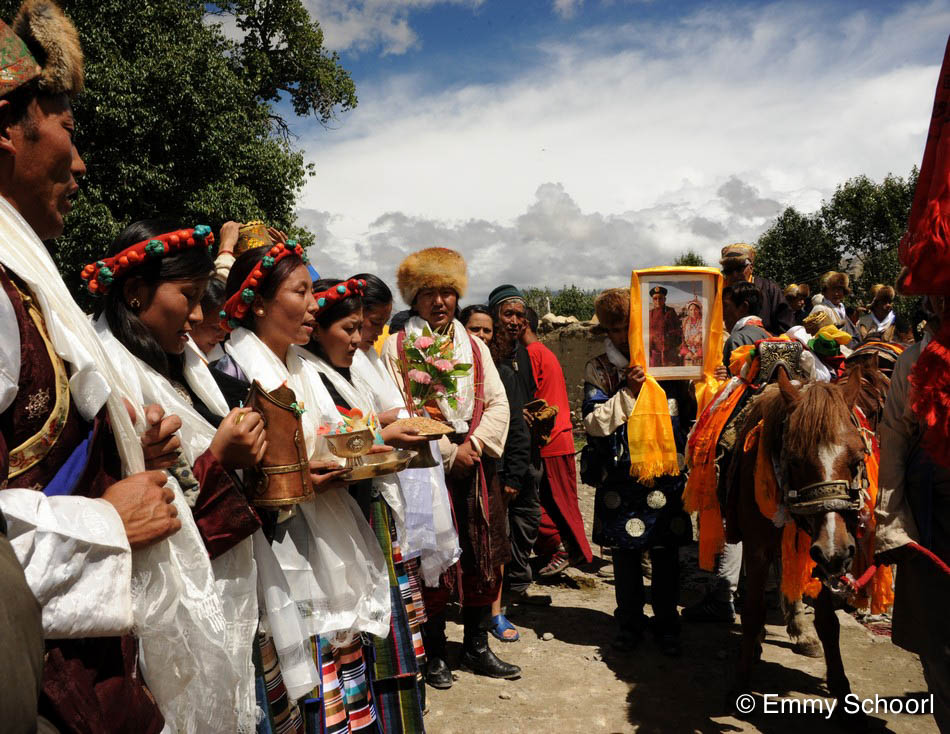 Carrying the photo of the King Bista

Although the late King was not present in real-live, the photo of the late King Bista and the Queen, Rani Sahib, was always carried by his relatives during the festivals and even his horse was nicely decorated and ready for a ride. The people tried to get a touch by the King’s horse shoe as a blessing. I followed and tried too…I liked the idea and was standing just next to the scene, so I got my blessing too.

It was as if the late King was present always and especially at special occasions and even they had the tea cups waiting for the late King and the Queen. I witnessed the Tiji festival of three days at the end of April that his photo was always set a prominent place with a great view on the crowds and also carried with the parade to the field outside the wall of Lo Manthang at the very end of the Tiji festival when they fired the old guns. He was ‘present’ even if he was in Kathmandu! 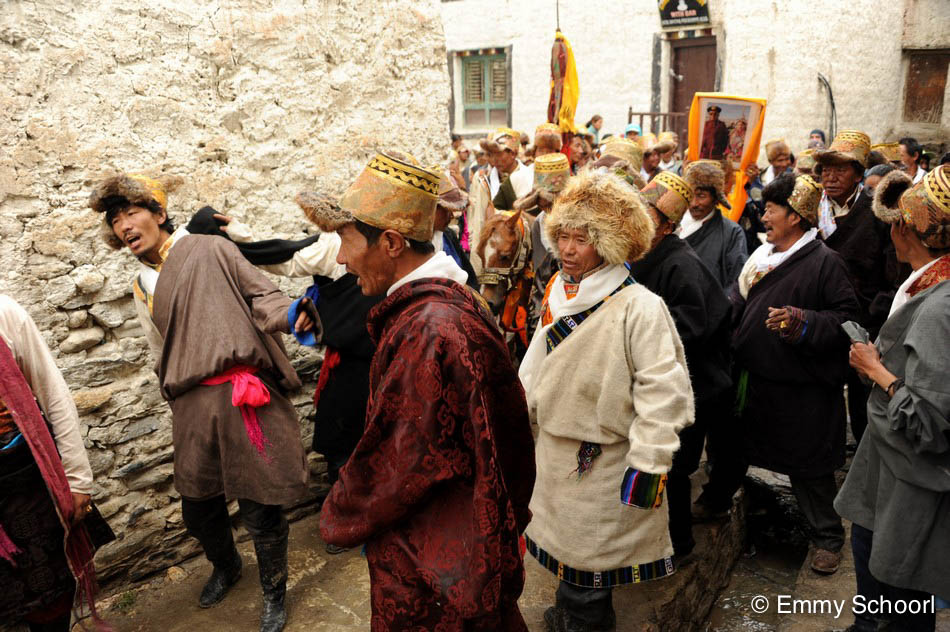 Return to the old Palace after a festival day 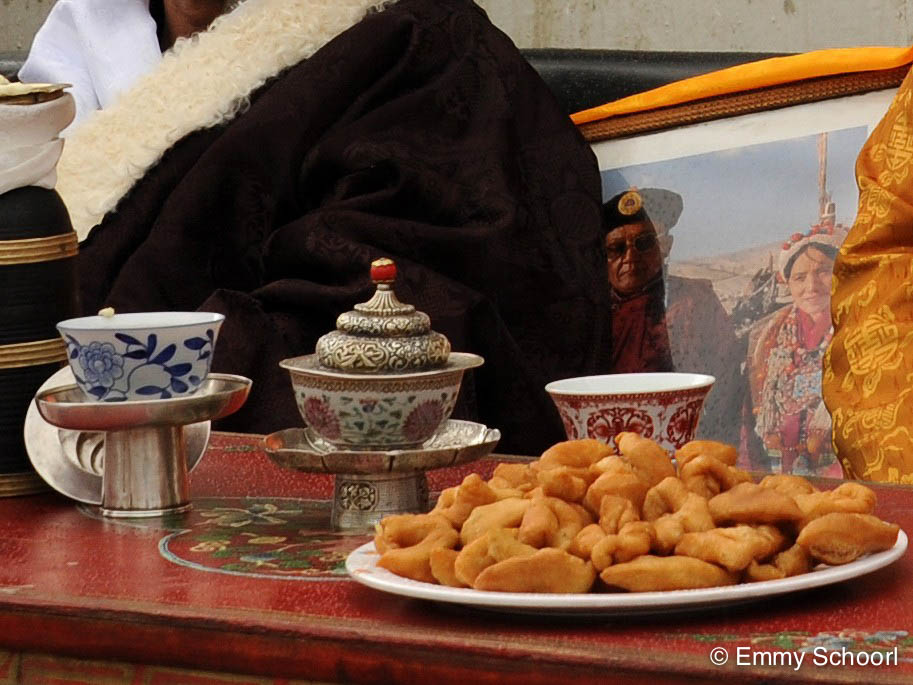 End of the Tiji festival 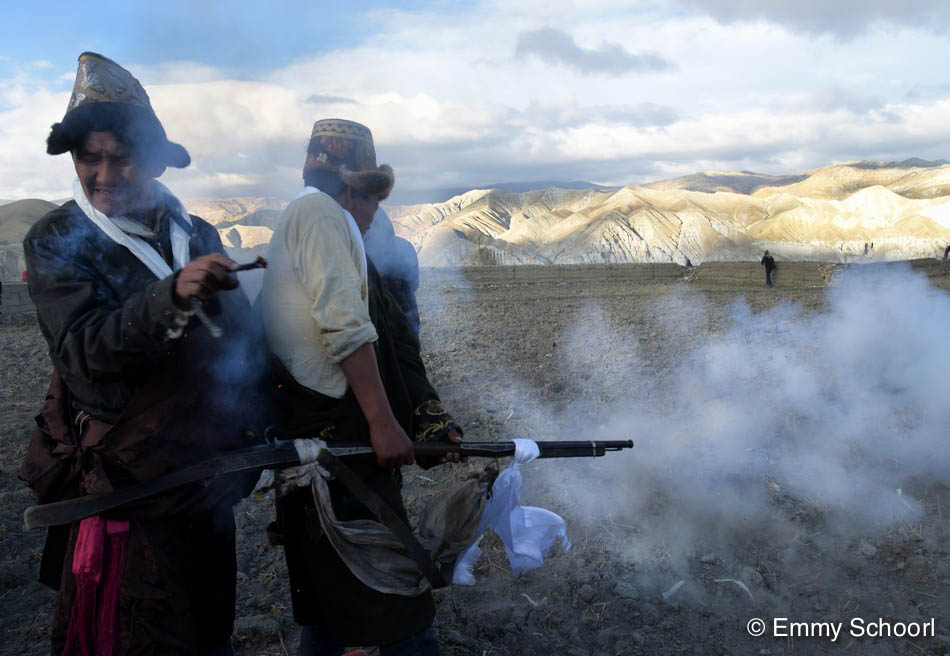 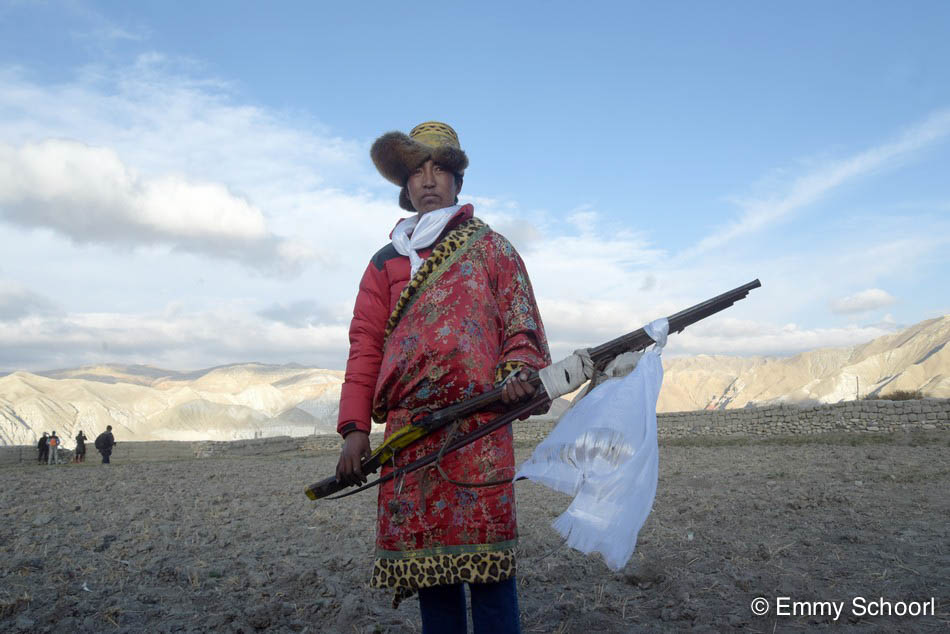 My condolences to Mustang

When I heard the news, I sent an email to the nephew of the late King, Tsewang Bista and to the head monk of Mustang, Lama Tashi, with whom I became good friends and exchange often emails, because I wanted to express my condolences for this loss for Mustang and for the people who were near to him. Lama Tashi is now in Kathmandu and I was sure that he would be busy with helping with the ceremonies for the late King. He replied: ‘

Dear friend LA. Thank you very much for your condolences for our sad news and last cremation was yesterday. With lots love and blessing Tashi Delek. Lama Tashi

And he had attached a picture which he had taken with his mobile. His body was held at a monastery at Bodhnat in Kathmandu, to allow people to pay respects for the first 2 days after his death.

‘A sad loss for your soul place!’

That day I was feeling sad because of this news and also that I can’t be there during the ceremonies. Many Mustang people live during the winter time in Kathmandu because Mustang is extremely cold, so I’m sure that many people came to pay respect to the late King Bista during the ceremonies and the cremation. I searched for flight options to Kathmandu, but they are still costly and of course I would arrive much too late. I can only burn some candles for him, think about him and wish that he can rest in peace and can find the light easily. The Buddhist believe that after a person has died, there is a transition period for 49 days, what they call the ‘Bardo’, and during this period the dead person’s soul is still present and they say that he or she can hear all what we say or see what we do. The Bardo, is the period of the afterlife that lies in between two different incarnations. My explanation is maybe much too simple, because it’s a complicated period with many stages where the dead persons goes through. I can only say that I hope that the king sees me far away in Shanghai and although I did not meet him, it feels still as a loss to me too! It sounds quite sentimental and strange, but I can’t help the way I feel. Sharing the news with some friends who also have connections with the Himalaya or who have been with me in Mustang, one friend wrote back: ‘Oh, that’s a sad loss for your soul place!’ Indeed it feels like that!

Life as a Nepalese princess?

Writing this down, I suddenly remember what a blind Chinese Qi Gong master and TCM doctor (Traditional Chinese Medicine) told me some months ago. I came to see him and my Chinese friend Jade who introduced me to him, helped to translate. Feeling only my pulse, he suddenly said something about my previous life:”You feel very connected with the Himalaya and the reason why you always want to go back to Himalaya is because you had some ‘previous lives’ there and also you have been a Nepalese princess”. So maybe he means with Nepalese, that I was a ‘Mustang’ princess? The Qi Gong master didn’t see me (as he is blind) and so he couldn’t see any signs that could have directed him to ‘my love of the Himalayas’. Only he maybe could have picked up energies around me? Another thing the Qi Gong master had said:”You will have some small accidents in the future”. ” Not seriously” he added, but he suggested: “Maybe you should find a monk in the Himalayas to help me to ‘get rid of this’”. So that will be my task in the near future and a good excuse to travel back to the Himalayas again ‘to solve this problem’! 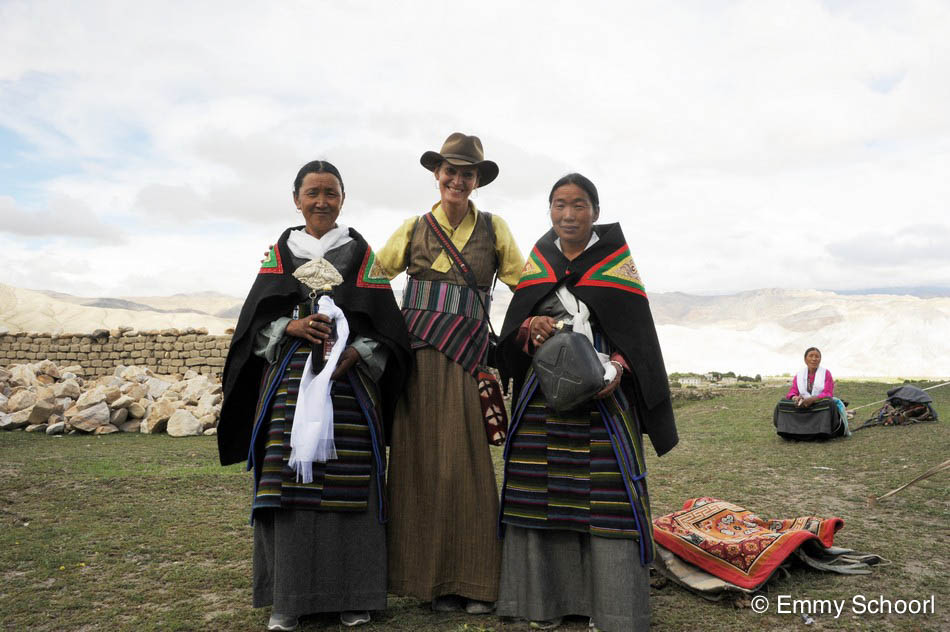 Dressed as a local Mustangi woman

Why my late visit to Mustang?

The big question for me remains still: ‘Why it took me so long to go to this corner of the Himalayas?’If I have family there, I should have paid them a visit much earlier! I’ve been to Tibetan areas and to Indian Himalayas (Ladakh & Zanskar) many times, but suddenly I feel the need to explore Mustang…Not one visit but many times! Explanations of past decisions stay still sometimes a wild guess, but it consoles me a bit that at least I have visited Mustang this year twice, when the King was still alive and I could feel his presence through the respect that the local people paid him.

The girls asked me for a photo

Thank you for reading. Please visit www.emmyschoorl.com for more stories that will follow…

Did you become interested in travelling to Mustang, for trekking or sightseeing; please write an email to info@emmyschoorl.com for getting more information.

This entry was posted in Mustang, Travel.