This is my first blog about Mustang, more Mustang blogs will follow!

The start of my exploration of ‘Mustang, A Lost Tibetan Kingdom’

Intrigued by the book ‘Mustang, A lost Tibetan Kingdom’ by Michel Peissel, which I bought in Kathmandu in 2015, just after the devastating earthquake, when I could help to bring some relieve aid to Kathmandu & Bhaktapur. The book intriqued me, I searched for photos of the area and started to visualize myself in Mustang. Mustang is now a part of Nepal, bordering Tibet, and the culture is still Tibetan. Although I had never been in this area, I travelled already in many other Himalayan areas, which always feel like my home, so I knew for sure that I would like it, but not yet to which extend… 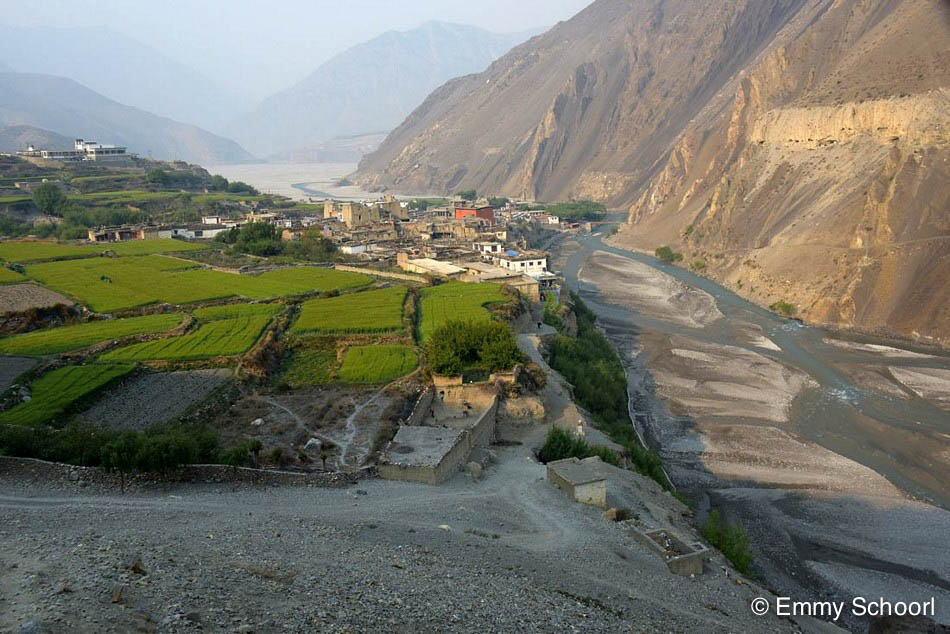 Following my dream, in April 2016 I organized the tour to the Tiji festival combined with trekking and friends joined. First days in Mustang were the trekking days to reach the capital Lo Manthang, a walled city. Trekking is like a bit as meditation. Surrounded by the impressive mountains, confronted with the solitude of the landscape, distracted by the impressive range of colors, all at high altitude which requires your own rhythm of steps and breathing. With the high altitude (on average around 3900 m) it is high. One day you feel as walking in a flat meadow in Holland or the next day, you can be struck with the lack of oxygen. I always joke that something ‘went wrong’ with me; being born in the lowest country in the world, but feeling at home in the highest countries in this part of the world. 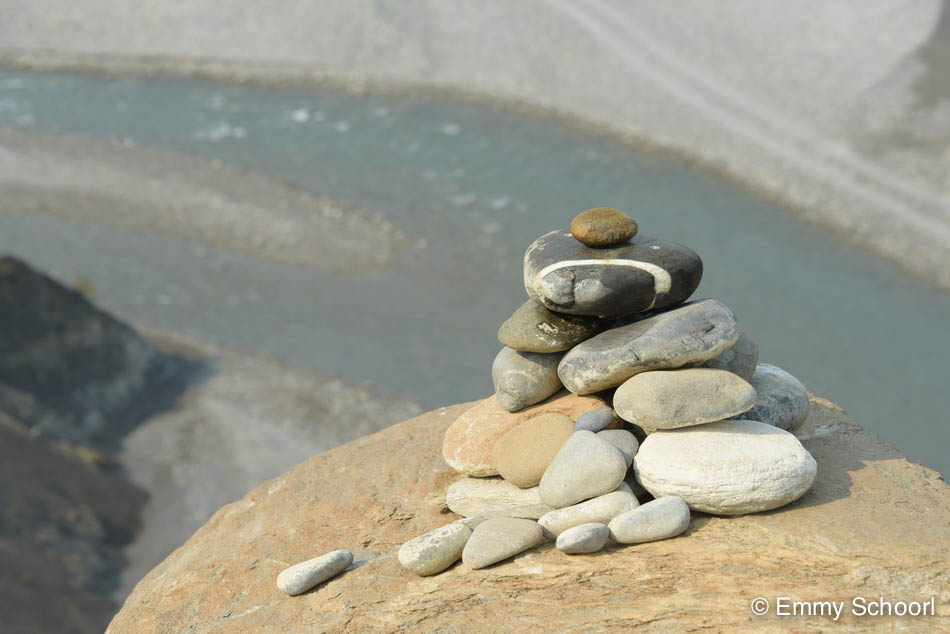 Stepping back in a medieval world

The first day of the trekking was the most impressive…The area was new to me, the guide and porters, the villages underway…everything felt still quite fresh and unexplored. Unexplored by us, because more explorers and tourists have been in Mustang, but on our path that day we didn’t see other foreigners before our lunch stop. We stopped in the small village of Tangbe. As we wanted a tea we entered a small shop and the guide asked if we could have a tea. The lady of the house prepared the tea, but warned that it would take some time and for me it was the perfect excuse to wander a bit in the village. I like to see how the people live their life in this remote area. The sisters of the neighboring house asked me where I came from. Studying in Kathmandu, they spoke good English. “Where are you going to?” they asked. They had heard about Tiji-festival in the capital, which is only 3 days walk away for them, but although it seemed so close to their village, they had never been there, but would have liked to come with us. And we travelled thousands of kilometers to reach Mustang to witness the festival, so it felt strange to me. They had to travel back to Kathmandu, so they couldn’t join us for the trek. They allowed me to go inside the parents’ house where I saw the father trying to cut some meat of the head of a goat and this scenery at the courtyard of this very simple house, felt as stepping in a medieval world. 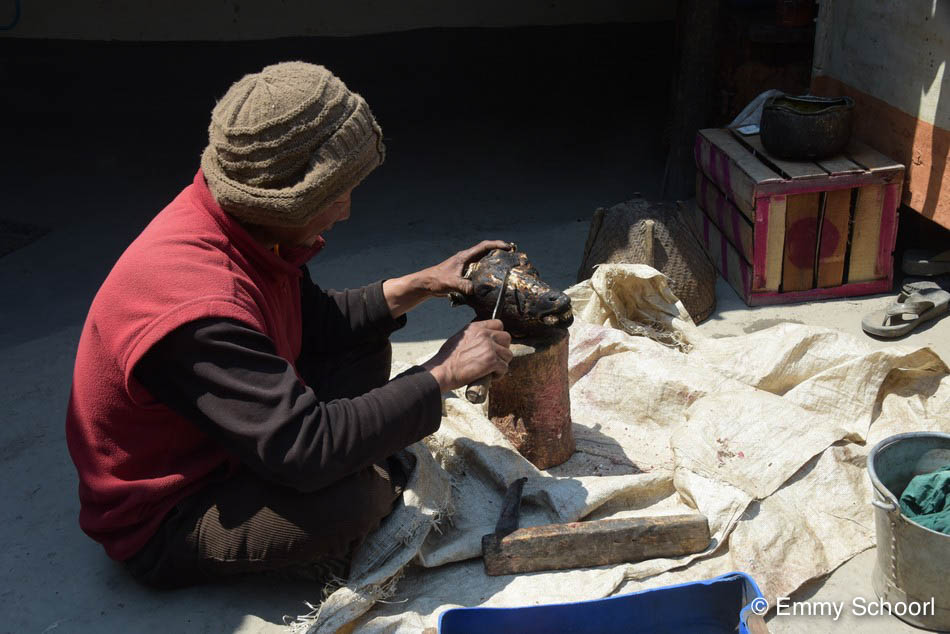 ‘Easier than shopping in Kathmandu’

Refreshed by the black tea we continued our way to Chusang, where we arrived around lunch time. There we had the choice if we would stay there for the night or continue the trek. It felt too early to stay, but to continue meant three hours steadily climbing up the mountains. Until now the trekking felt as a ‘pleasant walk’ and not so difficult. My friends decided to continue: “Too early to stop now!” “This is easier than shopping in Kathmandu!”, they said. So fueled by the lunch, we continued the trekking and more than three hours climbing up was ahead of us. We weren’t very aware for what we had chosen… 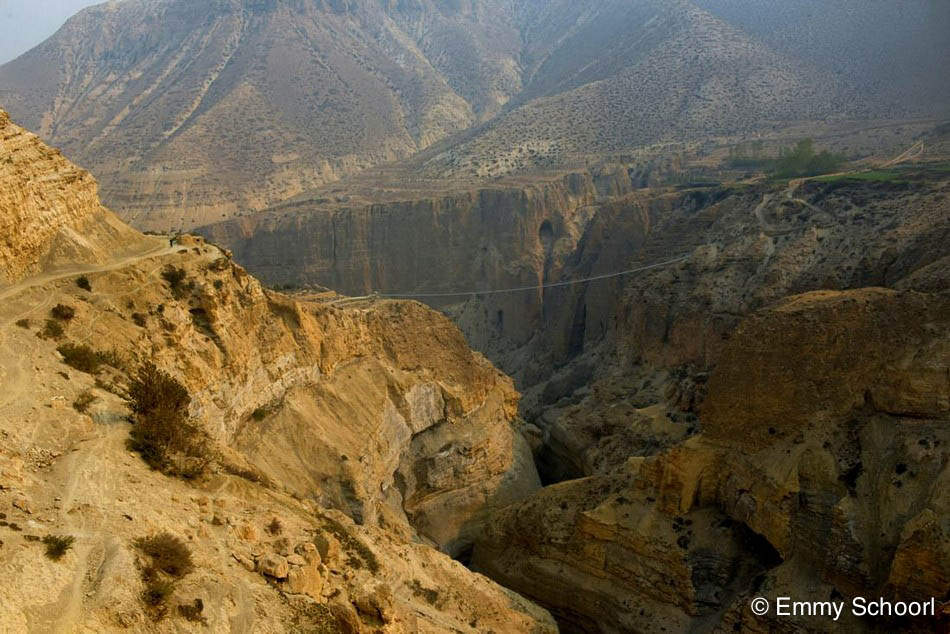 The first hurdle we faced, was a steep hill after the village Chele, 1,5 hour walk from the lunch place. The guide book describes is as ‘it seem as quite a pull up’. After the lunch a very strong wind had started which is typical for Mustang’s afternoons, and this ‘pull up’ seemed almost impossible to take combined with this incredible strong wind. We had to climb up with hands and feet because the wind blew us over. Cold, because of the wind, and the unpleasant sand scrub in our faces, I almost gave up! Facing three hours of this wind, I thought that I couldn’t make it. Raja, the guide, called me from the higher level and despite the cry of the wind, which made it impossible to hear the words, I understood that he was trying to explain me that it would be better after this first hill. Sitting for some minutes, I tried to put on quickly my extra wind jacket and a scarf to cover my face. Even that wasn’t easy to do with the strong wind. I managed, pulled myself together and continued. It was hard to believe that it would get easier, but I didn’t want to give up at this point. After this hurdle, Raja was right. We had less wind and sensational scenery waited us. From there, it was steadily going up as he had ‘promised us’ before we started. The path was clear and broad enough, the view on the yellowish canyons incredible. From there, the walking came easy again for me. The sun in our face, less wind and treated with panoramas, I got back in the walking rhythm. It’s a strange sensation in the mountains that one moment it can feel very difficult, almost impossible to continue and the next moment, it has completely changed due to the weather circumstances. Nothing is less predictable than the mountains. 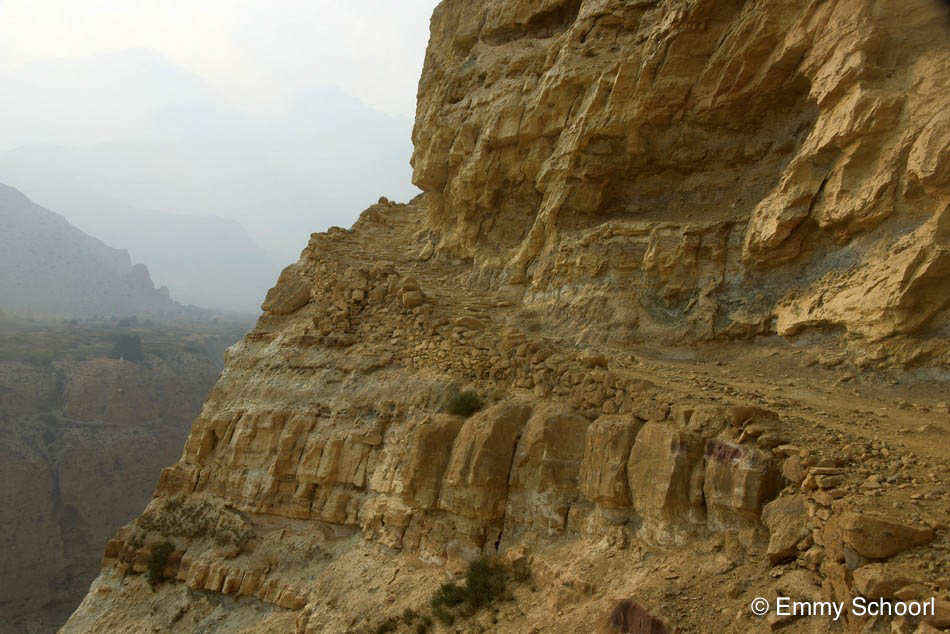 From there I had enough time to enjoy the landscape, the sounds of the crunching sand under the shoes, to admire the stone men, piles of stones helping to mark the path, to breathe in the fresh air, to notice all the shades of colors… a lot to take in! The rhythm of the steps is meditative. But also what happened during meditation, my thoughts were drifting away and I hardly can believe that I was walking in Mustang, so much to see and explore! I felt almost anxious that I still wanted to see so much of this ‘lost Tibetan hidden kingdom’ and I do not have much time. All the lessons of being in the ‘NOW’ are sometimes easily forgotten. 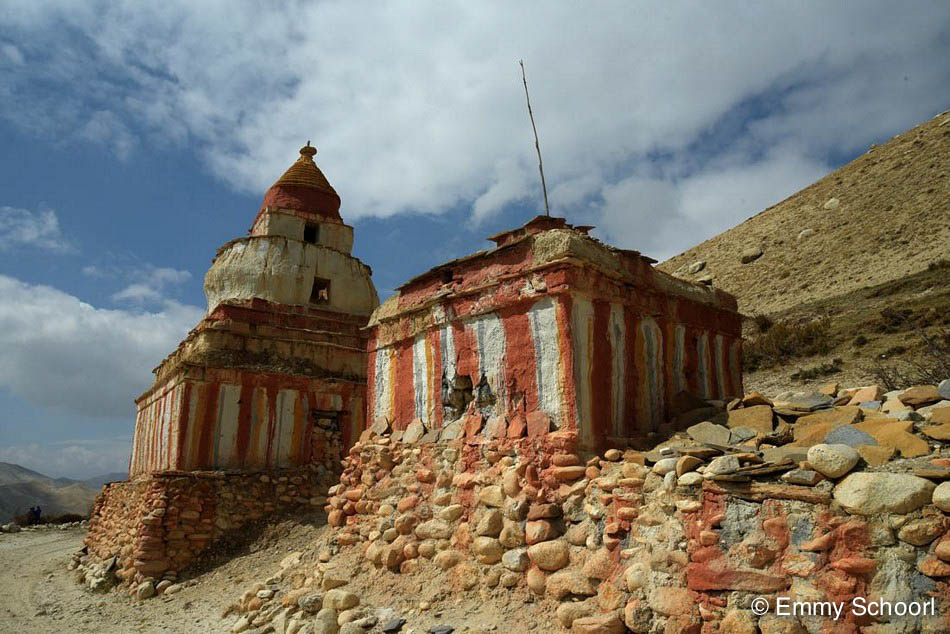 My friends follow further away in the footsteps of Raja, the guide. It took them longer to climb and they were facing more problems to walk at high altitude. Maybe after all ‘Shopping in Kathmandu’ was maybe easier… much easier! The friend who had said that, later thought that he almost would die there in the mountain of Mustang but luckily he did not. He struggled but finished the day. We arrived at Samar, a small village at 3660m, and a little girl playing around the stupas in front of our home stay, welcomed us with a beautiful smile. We were happy to sit down and have a salt tea in one of the houses which just became also a home stay and we were hosted with a nice Mustang family. Our first trekking day, our first real Upper Mustang experience, had left us incredible impressions. The joy to discover something new, has also the reflection that you never could have the same experience again, the first time has gone! 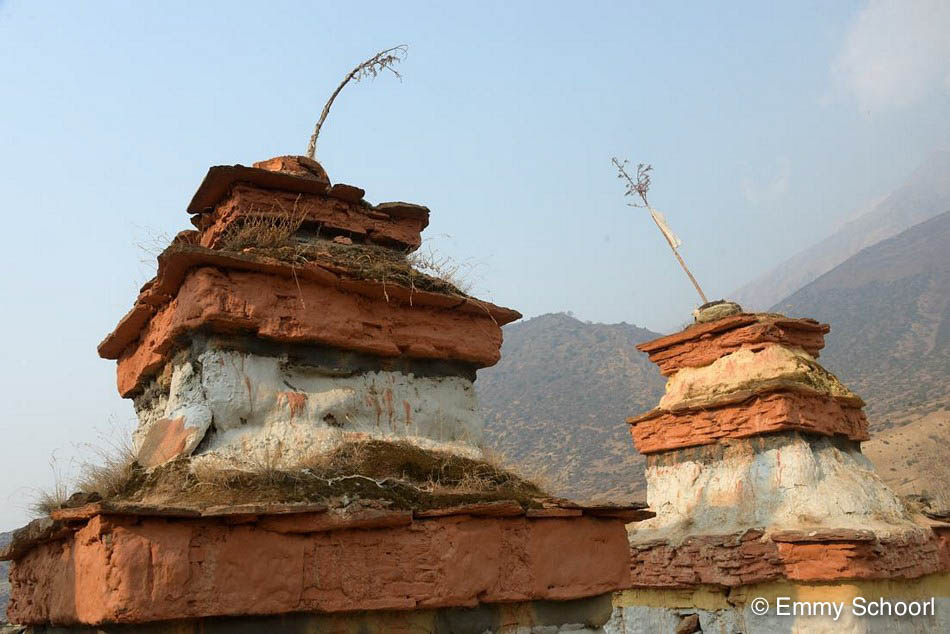 The love for stones and sand

When Michel Peissel, trekking from Lower Mustang, reached the point when he had the first panorama view of Mustang and the Annapurna range, he is impressed by the beauty. Tashi, the guide and friend, who travelled with him to Mustang and had his roots in Amdo which area is famous for the grasslands, denied: “Beautiful it is not! All stones, dry horrible country. What do they do here, the people-eat stones? This is surely unhappy country.” Michel Peissel asked him then what he likes: ”Trees and grass are happy, this is just stone”. It’s one way to look at it. And it happens that I love stones and the wide panoramas with snow-capped mountains, barren landscapes and indeed a lot of sand and stones! So I was not disappointed by the stones and the dry country of Mustang, in contrary. This barren land captures a strange kind of beauty for me and has still many mysteries that attract me. One visit didn’t feel enough to unveil the stories how people live their life. Although the food, some habits and rituals, Buddhist monasteries were similar as in Tibet, Ladakh and Zanskar (Indian Himalaya), I was touched by a growing curiosity for Mustang and its people. One visit did not seem enough! 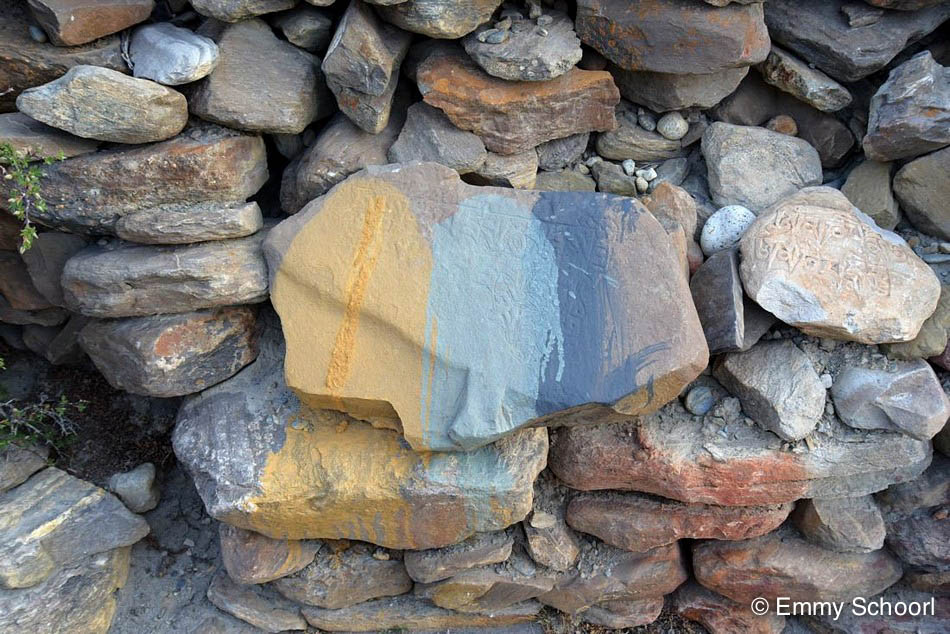 My next visit to Mustang in August!

In fact the stones and sand, the people and this mysterious culture and habits gave me the drive to visit Mustang again! In August, I went back also during Yarlung festival, the harvest festival when they enjoyed the horseracing and picnics. Not as dry before, now the fields were fresh green or purple of the ripening buckwheat. I liked the big contrast with the light green of the fields and the barren mountains. Different season came with different colors and rituals. Coming back to a place and the pleasure to see people back and get to know new people, it feels always that I’m getting in touch with a deeper layer of the culture. This time with more contacts with the royal family and local people, becoming closer to the head monk of Mustang, who I became my friend in the meantime, and also to the head monk of the main monastery of Lo Manthang, I get a little bit more an inside view than from the outside. More travels to Mustang will follow; so more layers will be explored… 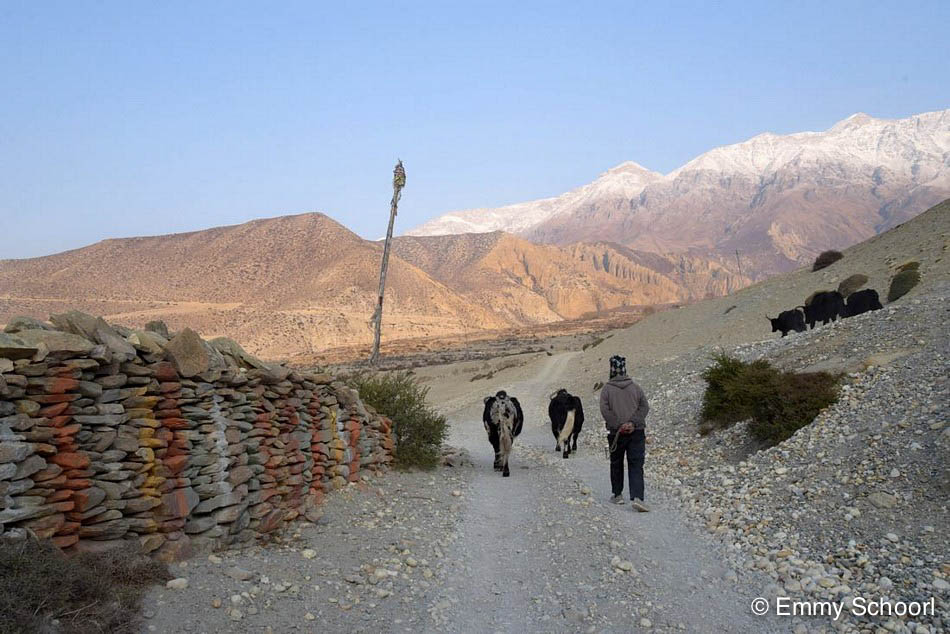 Did you become interested in travelling to Mustang, for trekking or sightseeing, please write me an email to info@emmyschoorl.com for getting more information. HimalayaWander.com organizes beautiful custom-made travels or group-travels to Himalaya and other parts of Asia and sometimes combined with festivals.

Thank you for reading. Please visit my blog again at www.emmyschoorl.com for more stories that will follow about Mustang and other travels.

More blogs about the stones, the rest of the trekking and the special Tiji festival will follow soon! 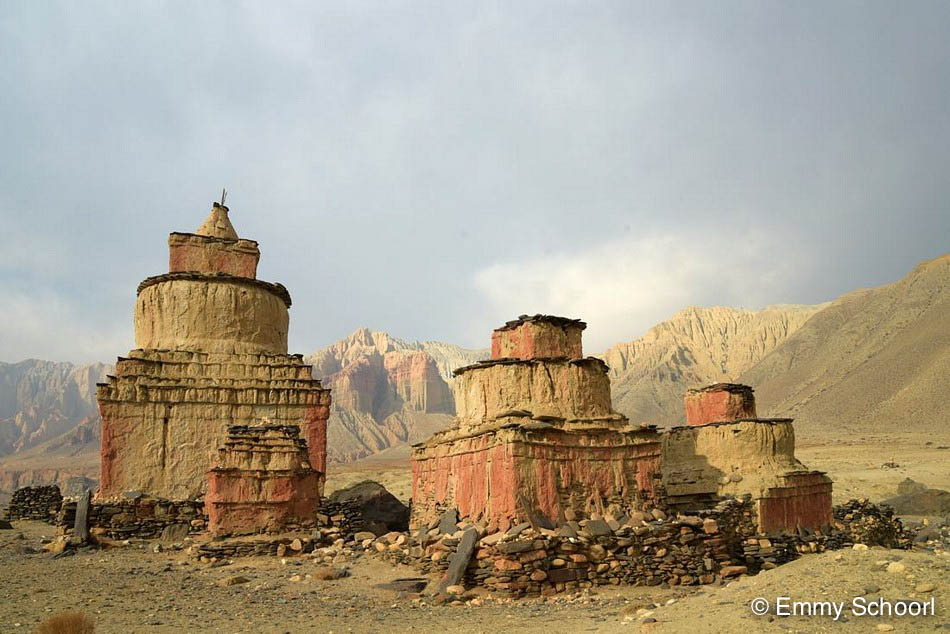 The reason to go back to Mustang 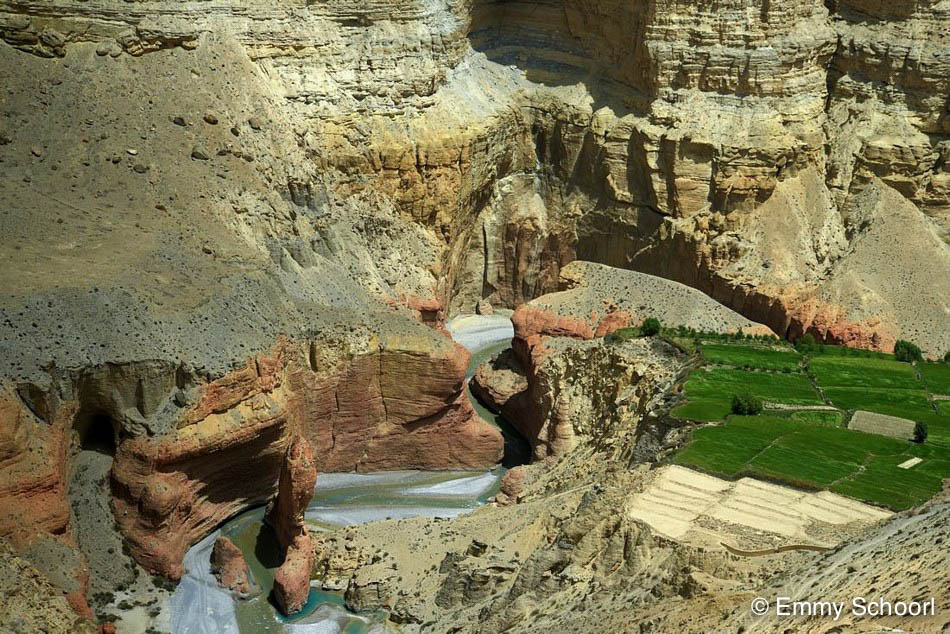 This entry was posted in Mustang, Travel.